A Cellphone Can Protect You 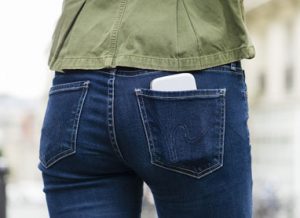 In footage posted on YouTube in January, an outraged young Indian woman wields a cellphone to film a middle-aged man she accuses of groping her – twice – between the seats on an IndiGo Airlines flight. ‘I’m videotaping you, mister!’ she tells him as he mumbles apologies. ‘If you ever do this again, you’ll remember this episode.’

Reports of harassment and rape of women are soaring, especially in countries with rapid social change such as India, Egypt and South Africa – and women are fighting back with their phones. It began in the wake of the horrific gang-rape of Jyoti Singh, a 23-year-old medical student, on a bus in Delhi in 2012. Six men sexually assaulted her with an iron rod and threw her naked from the moving vehicle. She died 13 days later. The following year, reports of rape in India spiked 35% to 92 a day, triggering protests and political investigations.

In a country where ‘Eve-teasing’ (harassing unaccompanied women) is widely accepted and women are blamed for provoking it with their ‘behaviour’ or dress, the most striking response came from women themselves. Last November, a 27-year-old woman and four girlfriends were parked outside an ice-cream shop in Bangalore when a pack of baying men surrounded their car, trying to force open a door to reach them. She filmed their plight on a smartphone. The 45-second clip went viral, shocking the world and identifying the men. In 48 hours, six had been arrested.

When another young woman was reportedly raped in an Uber car by her driver in Delhi in December, she too whipped out her phone, and snapped the licence plate. The driver was quickly arrested and charged.

Closer to home
Police statistics give South Africa’s rape rate as 23 a day but research by the Medical Research Council puts it well above India’s, at a shocking 350 a day. ‘Only one in 13 women reports rape by a stranger and one in 25 by someone she knows,’ says Kathleen Dey, director of Rape Crisis Cape Town.

Public sexual harassment is also at a high. Incidents posted on the website of the South African chapter of Hollaback!, an international online movement (Southafrica.ihollaback.org), range from a man making ‘kissing noises’ at a woman walking in Melkbosstrand, Cape Town, to another calling a woman parked on the Durban beach front a ‘stupid f*cking bitch’. ‘He was big-built. I felt small and incapable… Like a stupid f*cking bitch,’ she posted. ‘He should be embarrassed for being the kind of man who makes the world bad for his wife and daughters.’

Here, too, women are beginning to fight back with their cellphones. In what could be a ground-breaking case, a woman’s video footage is being used as evidence of a sexual offence. Last December, Cape Town photographer Chantelle Visser was waiting for a client before a shoot in the Tokai forest when a man ‘whipped out his penis and began masturbating while watching me,’ she said on Facebook. She posted a photograph she took of him on her phone, and announced that she had recorded the incident. She then opened a case against him. At the time of writing, she had handed the ‘video evidence’ over to the defence and prosecution.

Before this, it appears that gender-rights organisations have had no cases of women using phones against rapists or harassers but spokeswomen support the idea – in principle. ‘Cellphones and technology give women a tool to report a crime and get help when needed,’ says Czerina Patel, communications manager at Sonke Gender Justice. ‘From tracking devices on phones to the ability to message someone when you sense danger, a cellphone can be the difference between life and death.’

‘Carrying a phone can give a woman greater confidence,’ says Dey, confirming a study by the Cherie Blair Foundation for Women and the GSMA (an association representing 800 mobile operators worldwide), which showed 85% of women felt more independent with a cellphone and 93% felt safer. ‘But cellphones are a good thing only if there are services (including the police) to back them up – and that’s not always the case.’

Phone a friend
A number of mobile apps have been developed to make messaging for help and sending pictures easier and faster, and so safer. In January, India’s home affairs minister responded to attacks there by launching Himmat (‘Courage’), an app that allows women to send distress calls and the phone’s location to police control rooms and two relatives or friends in an emergency. Uber too announced plans for an app that will allow passengers to share GPS-tracking information and their driver’s photograph, name and licence number with selected family or friends.

South African women can already access similar apps, such as Circle Of 6, which Dey says some women have downloaded, though none has yet had cause to use it. In this free app, a tap of an icon sends a text to your preset six emergency contacts, alerting them that you need help and giving your location. PanicGuard is activated by tapping or shaking your phone, and automatically records your location, calls the emergency contacts you’ve stored, and turns on video to record any crime. Another shake, and it emits a piercing alarm.

Rape Crisis offers advice on Mxit’s ‘MySafety’ platform, says Dey, giving information on how to report a rape. The organisation is developing an app for release later this year for once women have reported rape. ‘It logs you into notifications so you can see your place in the criminal justice system and find out what your next step is. You can also access general information and advice.’ It will be available for both older-generation phones and smartphones, she says, and the public will be requested to donate old phones to be loaded with the app and distributed to women in need.

In another development, a South African chapter of the HarassMap app is expected to be launched soon, according to its website Harassmap.org. This was started by an Egyptian NGO worker in response to widespread public harassment and assault of women in her country, from groping to mass sexual attacks with penetration by fingers and sharp objects. CBS correspondent Lara Logan, a former Durban journalist, was a victim during demonstrations after President Mubarak’s resignation in 2011 – she was stripped, pinched and badly beaten with flagpoles.

Using HarassMap, women can anonymously SMS an incident they’ve experienced or witnessed, as well as the location. They immediately receive contact numbers for essential services, including counselling and legal aid, and the incident is plotted on a map, helping authorities to identify trouble spots – and helping women to avoid them.

But beware…
Filming or photographing someone engaged in a criminal act can be dangerous. ‘A man may turn violent if you take out your phone,’ says Kay Mahonde, legal manager at People Opposing Women Abuse. ‘It could set him off, especially if he’s intoxicated. We see the same thing with protection orders. I’d be very cautious. But do use your phone after an attack to take pictures of bruises and the scene (if things are broken), for evidence.’

NGO consultant Debbie Harrison, former director of LifeLine and Rape Crisis in Pietermaritzburg, however, believes violence is unlikely if a man is acting alone. ‘Most perpetrators are cowards who pick on those weaker and more vulnerable,’ she says. ‘If you’re very calm and sure of yourself, it often puts them off, and if you can tell them firmly “I’ve sent a message for help and your photo, so leave me alone”, chances are they’ll go. That said, we tell women to follow their instincts. Whatever you sense is best for your survival in the moment is the right judgment – and that may be to stay still and submit.’

There’s another danger in taking cellphone photographs or footage: posting them on social media can land you in serious legal trouble. ‘If you accuse someone of a criminal act or lower their reputation, it can be defamatory,’ warns Emma Sadleir, an attorney who specialises in social media and the author of Don’t Film Yourself Having Sex – And Other Legal Advice For The Age Of Social Media. ‘For something to be defamatory, three things are required: it must be published (which it is if you post it or simply share it on social media); it must have a defamatory meaning, such as public indecency; and it must refer to a person so that those looking at it know who it is, even if the person is not named.’

Some people need to be defamed, she says. ‘Remember, your primary defence is public interest and truth. You must have first-hand knowledge and evidence of the truth – it can’t be based on an assumption – and the onus is on you to prove it.’

Related: Kick Butt at Self-Defence with This Awareness Workout

Cellphones and social media can be extremely powerful because they give everyone a voice, Sadleir says. ‘They make everyone a policeman – what you post can be used as evidence in court, so just taking out your phone to film can make people behave better. But as with all power, it needs to be used responsibly.’

0
Cellphone Protection Woman
« Help for Men Who Are Being Abused
Our Newsletter – 3rd Quarter 2017 »
WAR ON SOCIAL MEDIA
SHARE WAR WITH A FRIEND
Do you have a friend who'd be interested to see what WAR is doing in South Africa to make a difference?