Woman Against Rape was founded by Janine Rowley, a business executive and model, who once walked the international ramps for top designer fashion brands. She and her team now walk alongside rape victims, abused and molested children and adults in South African to bring comfort, care, education and upliftment to people.

The organisation began by delivering comfort pack parcels to rape victims at police stations in March 2000. As the word spread of her work, the areas of operation expanded and Woman Against Rape was officially conceived. Since then Janine and her team have initiated several other projects to assist victims.

Most important though, is trying to stop sexual offences from happening in the first place which puts education at the top of the list of priorities for WAR. Teaching our children about respect for humans and animals alike, acceptable behaviour and rights to privacy are part of the educational talks we offer currently in the Western Cape for children at safe havens and at schools. We will be offering our educational talks in other provinces in the future. Our Edu-Activity Book and DVD sets teach about Good Touch, Bad Touch, Stranger Danger, Saying NO to Bullying and NO to Drugs, Animal Care as well as Self Care. WAR teams with corporate companies to ‘adopt a class’ and fund the book distribution in South Africa. A 16-week program teacher’s manual is included. The DVD is filled with cartoon lessons and catchy tunes to remember the principles learned.

A Word from Janine

"To be raped is an enduring pain that must be dealt with and, in some cases, exposed. I was a victim of child abuse and was motivated by the desire to ensure that nobody went through what I did. I felt so abandoned and had nowhere to go. People need a space where they will be counselled. It is amazing to see how one's frame of reference can change from negative to positive through support and help".

To encourage all persons to exercise their rights by teaching them that their bodies and spirits are sacred and no one may violate that right in any way, it is your constitutional RIGHT. WOMAN AGAINST RAPE (WAR) encourages all South Africans to educate themselves and to seek help in the event of violation or abuse and to know that there is someone who is prepared to listen and help by offering them assistance.

WAR’s vision and future goals are to aid many adults & children who are victim to rape, sexual assault and all types of abuse by: 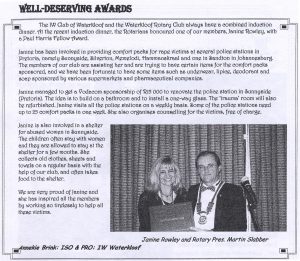 Janine was honoured with the prestigious Paul Harris Award from Rotary for her outstanding contributions to more than 17 charity organizations she serves and supports. She also cherishes the gratitude of children, exquisitely expressed in handwritten poems of praise. 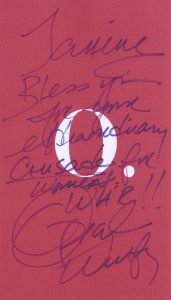 Oprah Winfrey applauded Janine for her continued dedication to upliftment and care projects she managed in South Africa and contributed towards WAR’s programs and activities.

She explained in an interview with the Irish Examiner, that too many people still don’t understand sexual abuse is not just about the act of abuse, but about the misuse of trust and shame that follow.

WAR is registered with SARS which means that any donation made to the organization will be officially recognised and the entity afforded a tax exemption, whether in monetary means or with goods.


Our benefactors are the life force of the organisation. Small monthly amounts allow us to make big changes in people’s lives.

We believe that companies can gain by allowing their staff to participate in helping others with WAR’s CSI projects while also working together in teams and having fun drumming together. These extraordinary experiences will excite, motivate, unite and inspire people.

Do you have a skill you can share that will help empower someone, or a venue for an event? Maybe you want to help us get comfort packs to trauma centres in your area…

WAR ON SOCIAL MEDIA
SHARE WAR WITH A FRIEND
Do you have a friend who'd be interested to see what WAR is doing in South Africa to make a difference?